Amidst the recent contract controversy between B.A.P and their agency TS Entertainment, Dispatch has revealed an exclusive Q & A session between B.A.P’s side, going more in-depth into the sudden issue. Read more to find out further details underlying their request to terminate their contract, which has been planned since May, according to various media sources.

Overall, Dispatch asked a total of 21 questions that uncover more information regarding the relationship between TS Entertainment and B.A.P, as well as minor details about finances, contracts, and more. 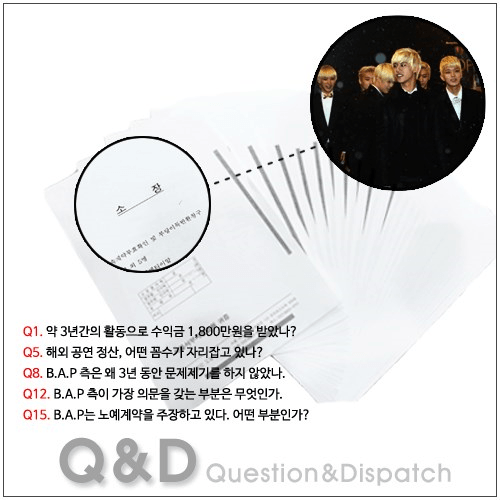 Q1. So for approximately three years of promotions, did they receive 18,000,000 won for their earnings?

D. In B.A.P’s case, housing, eating, transportation, and other living expenses were covered by the company. At least during their promotions they didn’t need their own personal money. However, it is different in personal cases. For example, the members had to borrow money from their families when they had hospital fees. One of B.A.P’s acquaintances had said, “They had no choice but to depend on their families for hospital fees” and “They had no choice but to endure it for their future.”

Q3. What are the terms of the agreement between B.A.P and their company?

D. According to the contract ‘Dispatch’ has received, the division of profits was considerably segmented. Firstly, album earnings were divided 1 (B.A.P):9 (company). They were given 10% from merchandise sales.

D. It is possible. B.A.P has agreed on the profit tariff. But, starting from the third album, the division has been raised to be 2:8. B.A.P has released 11 albums so far. But they only have one official album. Basically, B.A.P still receives 10% of album profits. 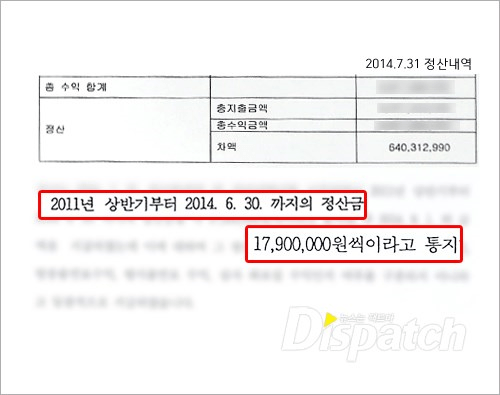 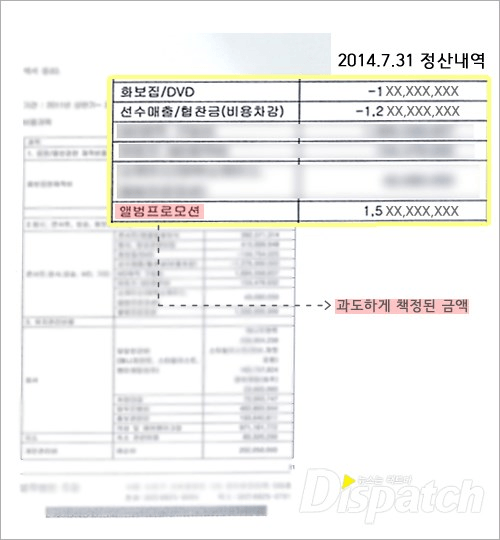 Q6. B.A.P is more famous overseas. What are the profits for overseas performances?

D. The profit division for concerts, events, and performances are 5:5. It is a higher division than album divisions. Commercial performance fees, magazine sales, etc. are also divided by half. However, we have no way of knowing if these sales have been properly calculated and recorded. B.A.P’s side argued that the profits from overseas performances were a trick.

Q7. What kind of tricks are present in overseas performance calculations?

Also, the overall payment of 1,790,000 won capital isn’t specified. For example, none of the payments are mentioned whether it’s an album, a commercial, a broadcast appearance, or an event. Basically, they are contracted to have a division of 1:9, 2:8, and 5:5 but nothing in their payment states what category they are receiving payment for; therefore, they are not able to know how much they are getting from the division.

Q8. B.A.P is accusing that there have been false sums.

Q9. What is the stance of the company on the album promotion expenses?

D. We have asked the head accountant “Where were the album promotion expenses pay used for?” As a reply it was said, “It went into the personal account of the CEO so I don’t know.” The B.A.P side has requested to read the transfer statement but was rejected. B.A.P’s side is hoping that the portion regarding the use will be revealed at the court hearing. 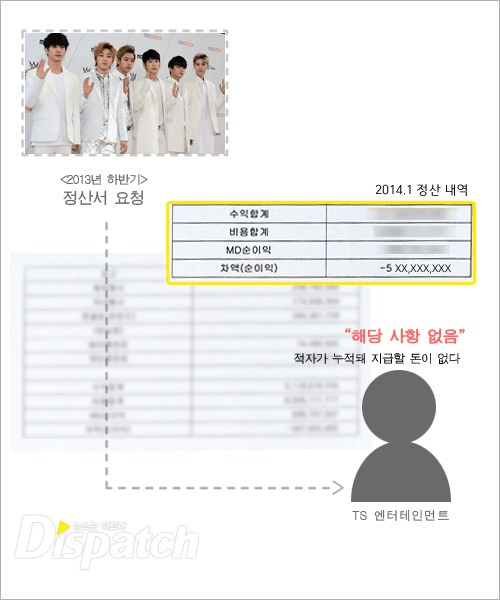 Q10. Why did B.A.P wait three years to bring up the problems?

D. They have requested the account statements from late 2013. The company didn’t reveal anything that year, and January of 2014 was the first time they revealed the account statement. However, to prevent leaking the information outside, they only allowed them to view it briefly. They added that they had no money to pay. They had told them that the expenses were greater than the sales so they were at a loss.

Q11. Did the parents of B.A.P accept those facts?

Q12. How were the account statement details for July 2014?

Q13. How did a group at a loss turn into a profitable group?

Q14. What is B.A.P questioning the most?

Even if they do believe in the company’s statement 100%, it is outside of common sense. If they gave up on the Japan performance profits and received the 5:5 division from the CJ performances…each member would have received at least 1 hundred million won. No matter how you look at it, it is not understandable and doesn’t make sense as to how “it’s only 1790 man won.” 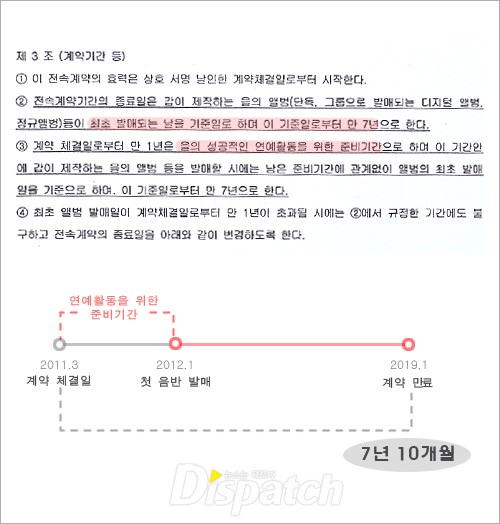 Q15. Then it is necessary to look over the contract?

Q16. It is known that the normal contract length is 7 years.

D: There is a particular clause in the contract. According to Article 3 of the contract, “The contract will end almost 7 years from the first album release.” They have stated that it took one year to prepare for a successful entertainment activity. They have used these tactics to extend the contract length.

Q17. What part of the contract is B.A.P arguing that it is a slave contract?

D: According to Article 3 Section 5, if they no longer can participate in entertainment activities due to personal affairs, they will extend the contract terms. Basically, in response to military duties, infant care, or being hospitalized for more than 30 days due to personal issues, they will extend the contract terms for the same amount of time.

Article 6’s statement of “The latter’s rights and responsibilities” also catch our eyes. If you look at Section 6, it states that if they receive public criticism due to use of recreational drugs, indecent relationships with the opposite sex, etc., all responsibility and loss following will be compensated by that person.

Q18. We know that this is similar to other companies as well.

D: The country’s entertainment companies return to a promoting system. They invest a lot of money into raising singers. Especially in small companies, if the singers don’t succeed, the company has to be responsible for all the losses. That’s why they make the contract terms as long as possible, not counting the years of mandatory military service. 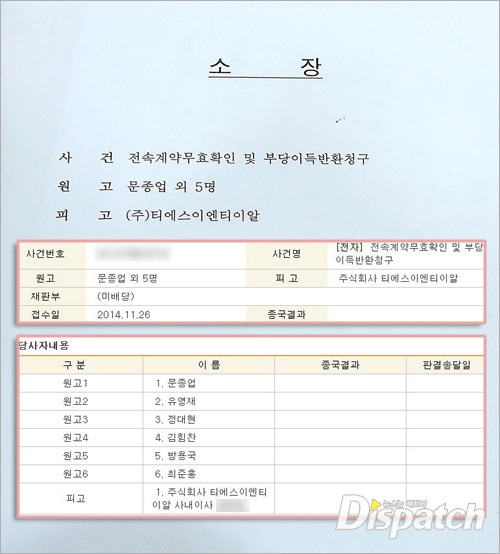 Q19. B.A.P has been aware of all this and still stamped the contract.

D: B.A.P has understood those parts. They said “It wasn’t that we didn’t understand the early risks of the company. That is why we endured the unfair contract and not even getting paid for 3 years.” They want to know if the company has done what they had promised to do in the contract. Basically, it is a problem of trust.

Q20. Problem of trust, where has it gone wrong?

D: It was this past October 19. A member had been taken to the emergency room for exhaustion due to extreme stress and overworking. As he was getting an IV in the hospital room, a company representative had showed up. It was because the member needed to go to Changwon for a performance.

On October 24, there was also a problem when MBC had a performance in China. B.A.P had said they could not go to the China for the performance due to health problems. They even gave the company the doctor’s notes. However, the company representative said, “If the broadcast company sues us, you all will take full responsibility,” and forced them to go to the performance.

Q21. How is the process going after they have submitted the lawsuit?

D: B.A.P had stated that this is not simply a problem with payment. They have taken hold of the money they earned in the past and worried about the future. They asked how they could have a vision for the future with a trust already broken. That is why they decided to sue for the nullification of their contract and unfair gain.

The law will decide on the outcome of TS Entertainment’s unfair contract. However, TS will need an explanation for their payment statements. They will need to explain how B.A.P was paid that much and prove it. If it is shown that the money was used for personal reasons, B.A.P will be suing the company CEO for embezzlement and many more offenses.

Back on November 26th, B.A.P had filed a lawsuit against TS Entertainment to terminate their contract due to unfair treatment, including financial discrepancy. It had also been quickly revealed by B.A.P. that while their company had earned $9 million USD during a three-year time span, the group members alone had earned $16,000 each. TS Entertainment had quickly spoken up through their first statement, which reveals shock in response to the lawsuit, and informs that they will be looking into the matter as soon as possible. Meanwhile, “TS Entertainment” has trended worldwide on Twitter, and netizens have reacted in various ways across all sorts of social media. Meanwhile, B.A.P themselves had changed their SNS profiles in light of the contract lawsuit.

Updates have yet to be revealed regarding B.A.P and TS Entertainment, so stay tuned for more information, and possible trial dates between both sides.