With the ongoing anticipation for YG Entertainment‘s series of “Who’s Next” teasers, fans have been trying to interpret who the agency’s next target is, ranging from BIGBANG to Jinusean, and maybe even Lee Hi.

The first “Who’s Next” teaser, which was released early morning on March 25th, lead many fans to believe that YG Entertainment was finally hinting at a comeback for BIGBANG, especially after the numerous confirmed reports of the group making a comeback in the first half of 2015. The teaser displayed a set of dynamites with a timer that read the date of “2015.04.XX”, indicating a mysterious April 2015 release date.

Although the agency denied the reports of an April comeback and announced a delay in the album progress, fans continued to hope that the teaser was a hint for BIGBANG. Following the first teaser on the morning of March 25th, YG Entertainment released a second “Who’s Next” teaser in the afternoon with the same set of dynamites that read the new date of “2015.04.01”.

At this point, many fans began speculating that the teaser was, indeed, for BIGBANG due to a couple of detailed clues that have been surfacing the web. Several fans connected the dots between a short line from the lyrics of “Hallelujah”, BIGBANG’s 2009 OST for the KBS drama Iris.

A portion of the lyrics of “Hallelujah” include a line that says, “Don’t touch me, BIGBANG is dynamite,” in which fans compared with the dynamite teaser.

As the third “Who’s Next” teaser was released on March 28th, this time with the dynamite fused with fire, fans began to grow even more eager than before. Some fans of Jinusean and even the media, however, began reporting that the teaser may even be for an April comeback for agency’s hip hop duo, Jinusean.

As media began reporting several months prior to the teaser that the duo may be making a comeback in 2015, YG Entertainment denied any comeback news regarding Jinusean in the month of April.

Following the third teaser was a fourth on March 31st, displaying a dynamite nearing its detonation with a new time that reads, “2015.04.01 at 9:00AM”, indicating a confirmed date of release on April 1st, 2015 at 9:00AM Korean Standard Time.

Now fans were beginning to calculate and recalculate the mysterious dates and times given by the agency. Some fans even thought that these calculations were a bit of a stretch, but they never gave up hope. Check out the calculations below: 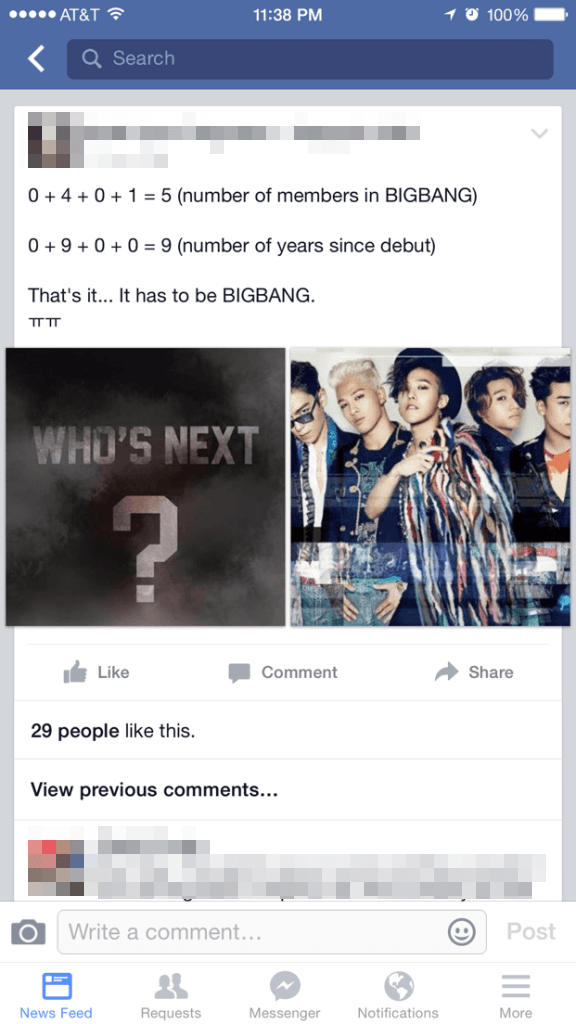 The above interpretation given by a Korean fan reads:

Many fans around the world have continued to come up with both plausible and implausible explanations and calculations as to why this upcoming teaser on April 1st may be for BIGBANG, but with YG Entertainment’s latest teaser and live counter on March 31st, others have discovered something shocking.

As the encoding behind YG Entertainment’s counter was found, fans saw that there was a very shocking and interesting term among the many confusing codes seen below:

Seen in the upper left portion of the encoding is the div code, “<div id=”leehi”>. Upon seeing this code, many fans have been shocked with the fact that this upcoming teaser may actually be for solo artist Lee Hi.

What are your thoughts?