With the end of the year quickly nearing, it’s normal that K-Pop fans analyze the year’s trends in music regarding which group was the most successful.

In this particular discussion and considering the many rookie groups who debuted in 2015, netizens analyzed which group was the most successful through the amount of their physical album sales.

Posting a cleaned up chart to display the numbers, the sales – tallied by Hanteo – revealed Pledis Entertainment boy group SEVENTEEN‘s mini-album BOYS BE had the high album sales this year among rookie idol groups. Additionally, they take second with their debut mini-album 17 CARAT originally released on May 29th. BOYS BE was released on September 10th and had the leading title track “Mansae.” 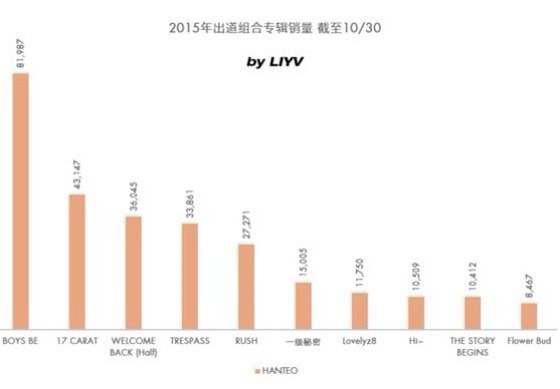 Boy group iKON from YG Entertainment comes in third with their first debut half album Welcome Back, selling an amazing 36,000 copies in just a month.

Others include MONSTA X, UP10TION, Lovelyz, TWICE, and G-FRIEND.

[+70, -3] They made fun of Seventeen saying they’re only popular on Pann ㅋ