On February 5th, SM Entertainment shared a mysterious, vague image through their various SNS accounts, possibly teasing for their next solo artist’s debut.

The picture shows a broken fortune cookie with the words “Beautiful” written on the fortune’s paper between the cookie parts, and was uploaded without a caption, leaving fans to speculate at the purpose of the picture.

Although SM Entertainment has yet to offer an explanation for the image, many fans have been speculating that the picture is a teaser for f(x) Amber’s solo debut as she was found to have retweeted the photo on her personal Twitter account.

It was announced earlier this week that Amber would start her promotional activities for her solo debut starting in the second week of February, following the completion of her song recordings and music video shoots.

Stay tuned to Koreaboo for more updates on this mysterious picture! 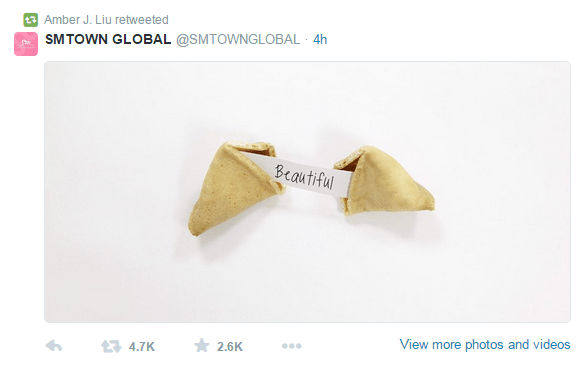