During Girls’ Generation Seohyun’s recent interview with star1 magazine, she unveiled some of her most private thoughts.

Following her debut as part of Girls’ Generation in 2007, more opportunities opened up for Seohyun as she branched into various areas in the entertainment industry on top of her primary job as an idol, including debuts as a television star, musical actress and more.

During the interview with star1, she was asked, “There’s a jinx in K-Pop where groups don’t last more than seven years. Is there a secret to Girls’ Generation’s longevity?” She answered, “The members are like family more then business partners. I think this relationship will continue, and I hope it does. They say girl groups have a harder time lasting, but we are thankful for each other. We’ve been through some tough times together. We always jokingly say that in 20 years we will be meeting up with kids of our own. I hope that becomes true.”

When asked her opinion on how Girls’ Generation is able to stay as a top group for so many years, she replies, “We were lucky. We say that we are lucky all the time. We’ve never really felt like we were in desperate situations or anything. Also, I think we’ve spent such a long time together that we energize each other. When we practice, we cheer each other up. We spent around five years training together, so all in all, we’ve spent 15 years together. So we don’t really think of this as work. We just have fun.” 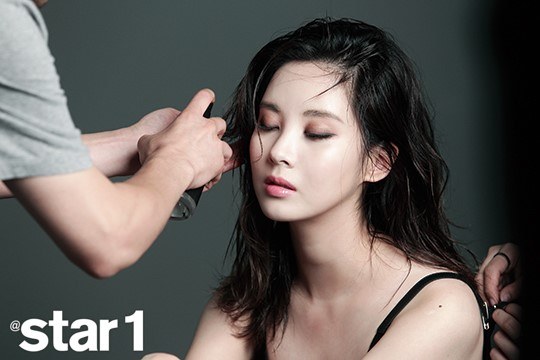 Seohyun added that while there has been pros and cons, she never regretted debuting in Girls’ Generation. “It’s sad that I don’t get to spend time with family and friends as much. Even when I went to school, I wanted to spend time with my friends and go eat junk food, but I couldn’t because I had to go practice right away. But being a celebrity doesn’t mean you’re busy 365 days of the year so I ask my friends to clear their schedule at those off days, and we spend it together.”

“I think the biggest point is before and after debuting in Girls’ Generation. Well, coming into SM was a turning point in itself. I was getting ready to go abroad to study in the US with my cousin but I was casted in 5th grade. My cousin went to the states and I began my life as a trainee. I wanted to be a pianist or a ballerina initially.”

NCT’s Xiaojun Gets Real About One Of His Biggest Concerns, Showcasing His True Personality