Korean netizens have expressed outrage towards a Japanese sushi restaurant after many internet reviews accused them of targeting the orders of foreign customers.

Several viral blog posts in Korea claim that the sushi restaurant chain located in Japan has been terrorizing foreign customers with extreme amounts of wasabi.

The Osaka-based restaurant, Ichiba Zushi, has been bombarded with accusations that chefs have been placing excessive amounts of wasabi in food ordered by foreigners. Many of the posts have included photo evidence to back up their claims.

These accusations have not only gone viral online, but have even gained attention from reporters in both Korea and Japan, with the media dubbing the situation as the “wasabi terror.”

The original post by a Korean tourist claimed that the chefs were referring them as “chongs,” a derogatory term used towards Korean nationals. When they finally ate the sushi, they were surprised by the excessive amounts of wasabi added by the chefs. Following a single post that went viral, many Koreans have also commented about their similar experiences at the restaurant and claimed discrimination was at play. 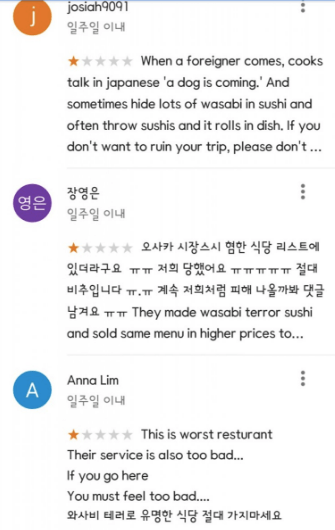 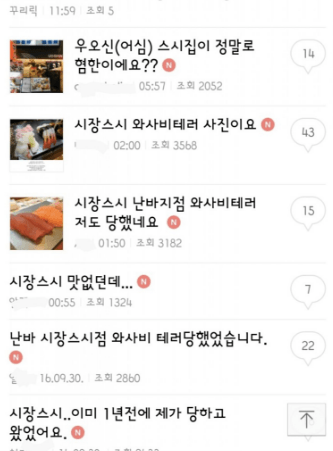 The restaurant chain’s operator later issued an official statement on their website after the incidents surfaced publicly in both Korea and Japan. Although the restaurant denied any claims that discrimination was at play, the restaurant admitted that the chefs did add excessive amounts of wasabi into unsuspecting customers’ food, sometimes twice the usual amount.

“Since so many foreign customers frequently ask for extra amounts of pickled ginger and wasabi, we gave them more without checking first. This led to unpleasant experiences for some customers who aren’t fans of wasabi. Also, we didn’t find any evidence of discrimination towards overseas customers, but we will try our best to teach our employees for a better experience for our customers.”

Despite the restaurant’s official statement, many Koreans are still outraged by the restaurant’s dismissive way of apologizing, and some are calling for a boycott of the Ichiba Zushi chain altogether.