In less than a week since they made their debut, YG Entertainment girl group BLACKPINK has achieved their first Perfect All-Kill with “Whistle.” On August 14th at 1:30PM KST, “Whistle” topped every major real-time and daily music chart in Korea, as well as the weekly and realtime cumulative iChart. Beating out tough competition such as Cjamm, G-Friend, and TWICE, BLACKPINK has continued to impress fans and media experts with their record-setting abilities.

In addition to the success of “Whistle,” the group’s other track “BOOMBAYAH” has also received similar success, currently ranking at number eight on the iChart. The music videos of both songs have also broken 10 million views each on YouTube. 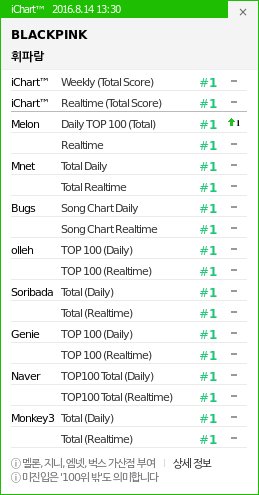 Check out BLACKPINK’s music videos below: